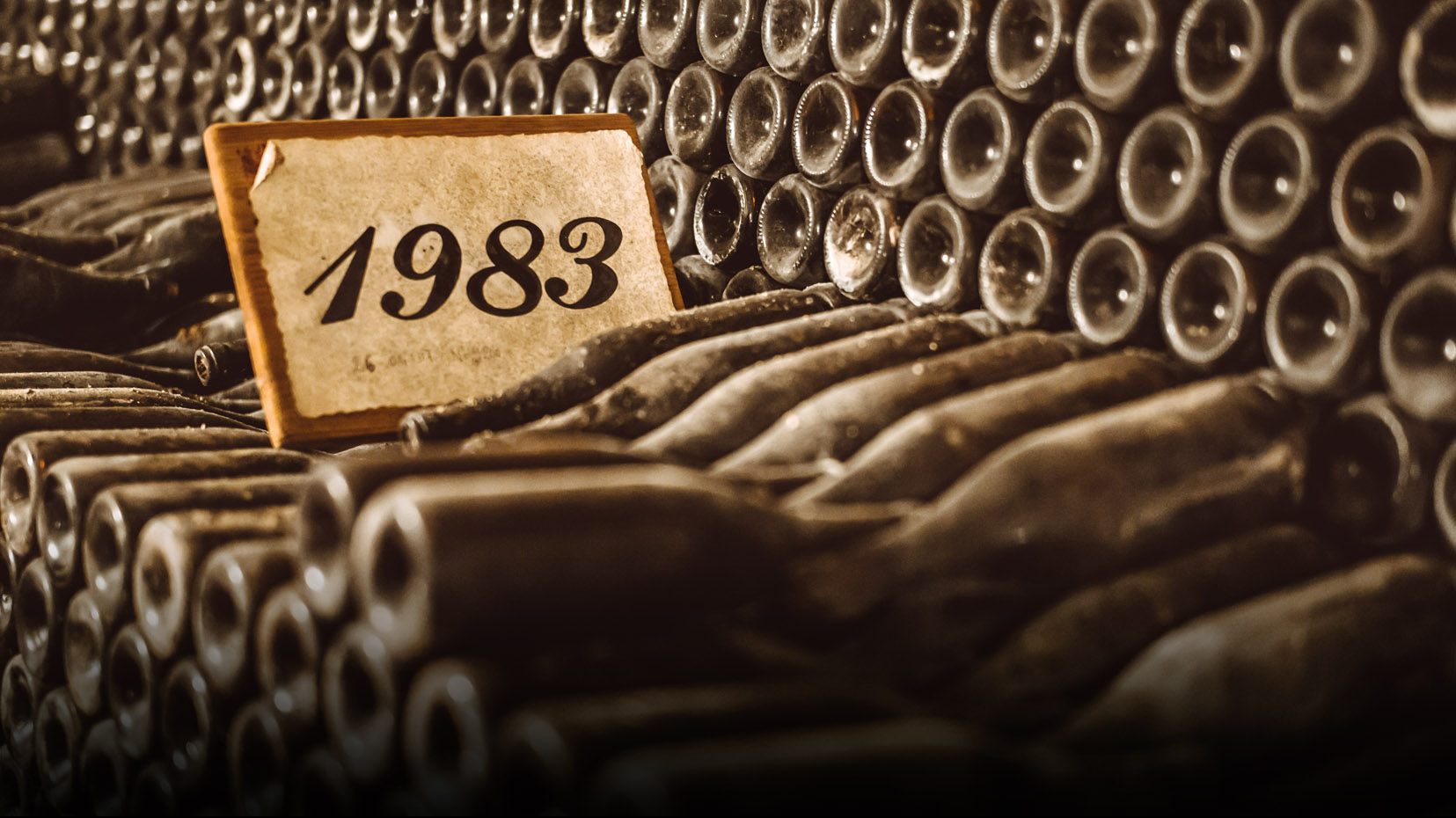 Emidio Pepe first idea was to make the best expression of Trebbiano and Montepulciano d’Abruzzo and for him, to achieve this, ageing was the key to have the refinement and elegance he was looking for and at the same time, preserve the youth and energy of the wines.
He was a pioneer in ageing those two grape varietals and especially, the first to hold back bottles with consistency over the years. As in the past still today, at least half of the production is stocked in the cellar and it get released only when the family think the vintage is at its best expression.

Today, Emidio Pepe ageing cellar has more than 350.000 bottles. It is a cellar in constant movement as old bottles are released in small quantity each year while the young ones are stocked and will be released only when ready. This is our historical heritage, a library of vintages and a collection of bottles that have been produced over the years with the same philosophy and method to photograph the climate of each season and make sure every bottle would tell its history. 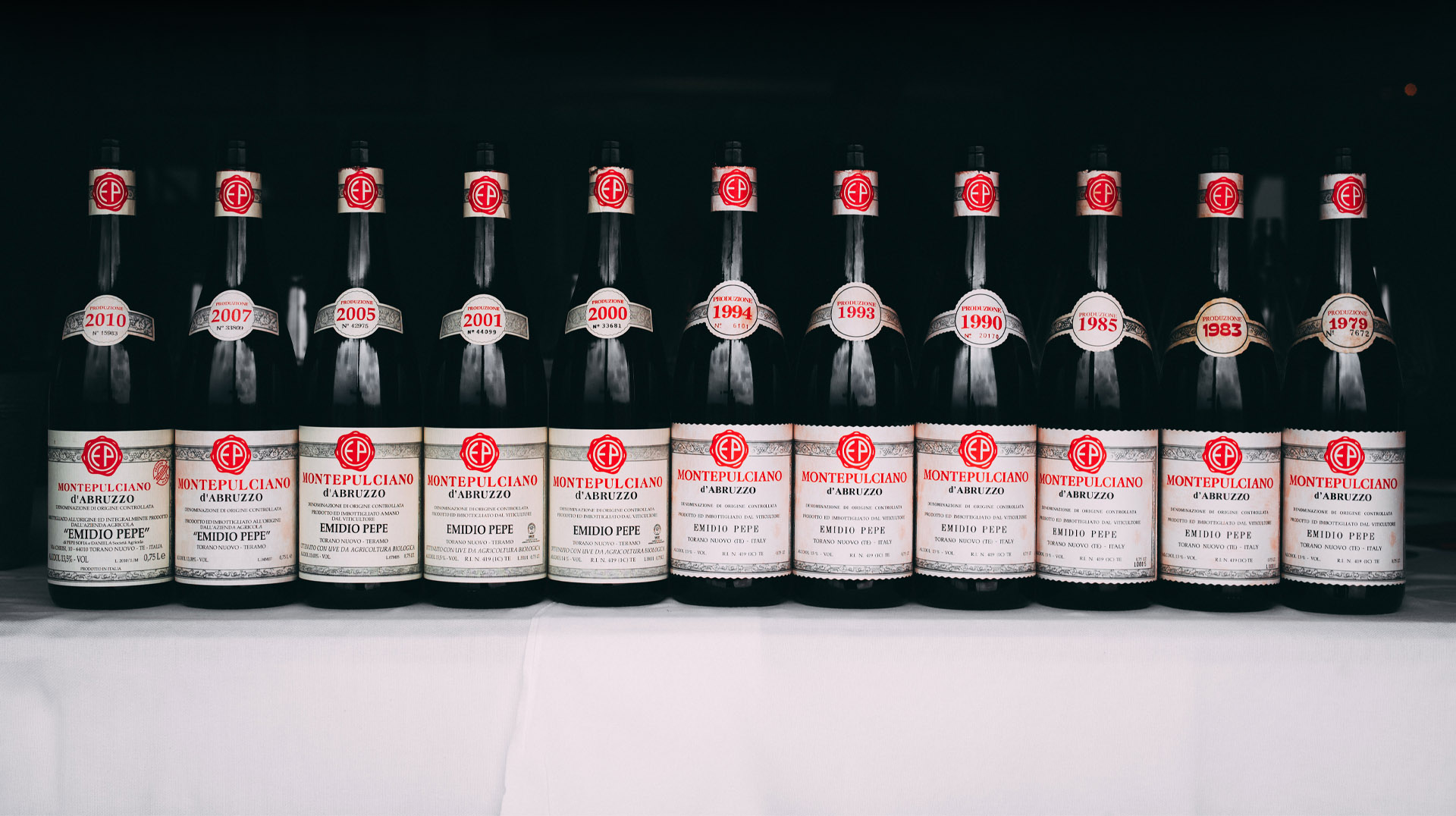 "Emidio looks at the piled bottles with admiration, utterly satisfied: the reason is crystal clear, they are the guardians of his memory"
Sandro Sangiorgi 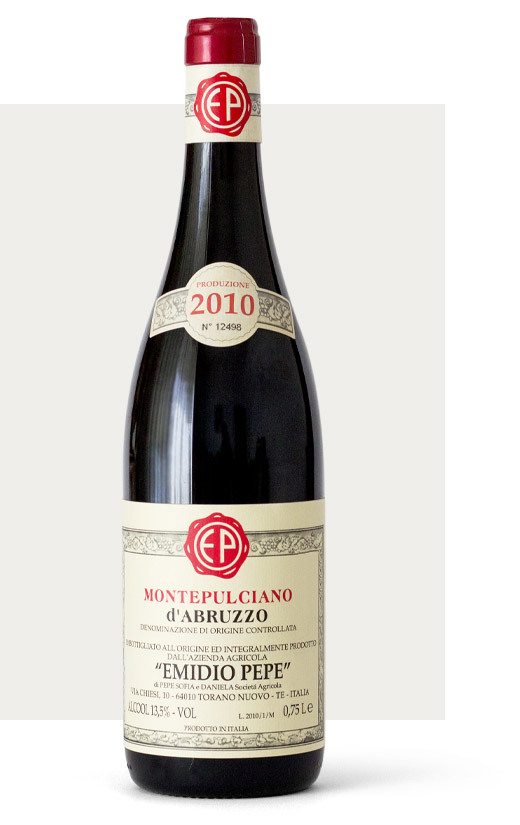 Montepulciano d’Abruzzo
Montepulciano d’Abruzzo is “the king” of the Abruzzo varietals. Emidio Pepe describes it as the wine of the future for its immediate beauty and his aging potential.
Trebbiano d’Abruzzo
Trebbiano d’Abruzzo is an ancient and indigenous grape variety from Abruzzo, a unique clone different from others of its same family. Its beautiful acidity together with the aromatic balance make of it a fine wine with complexity at the same time. It has an elegant and austere expression when young with a great minerality, as it is truly age worthy and able to evolve with time, after few years it gains complexity, volume and profoundness. 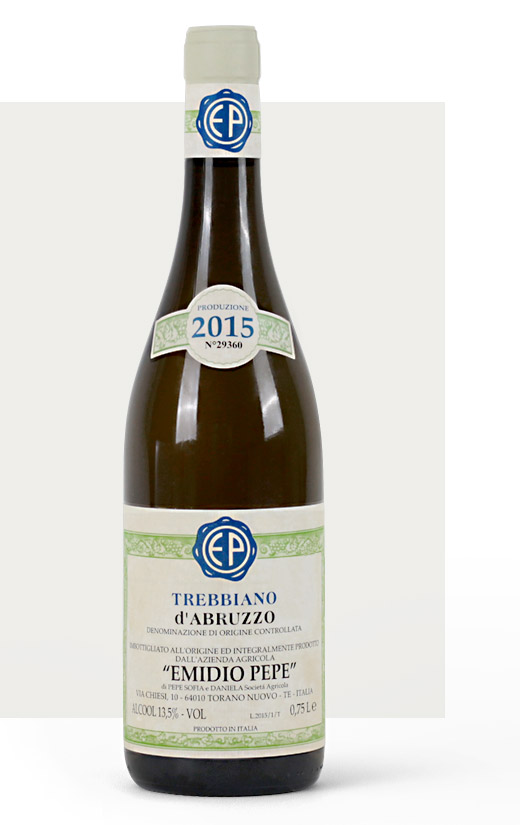 The last arrival in the Pepe family. Pecorino is an indigenous grape variety from south of Marche and north of Abruzzo. Used to be grown in high altitudes, Pecorino is voluptuous and generous.

Cerasuolo is a typical wine from our region, obtained from Montepulciano d’Abruzzo grapes vinified as our white wine: the grapes are foot crushed and the must ferments without the skins. The result is an intense rosé with fresh and enveloping flavors, it is a bright and energetic wine. 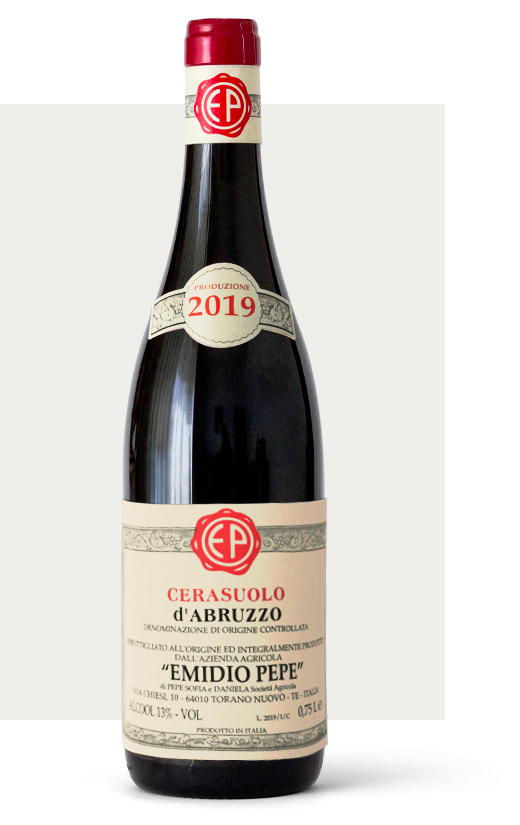 Click here and find out the characteristics of each vintage
2019: Early bud break, due to a winter with no snow, no snow and in February temperatures were already high. Spring was rainy, the whole month of May has been pouring at low temperatures until the second week of June, when the temperatures jumped up to 34/35 degrees. Summer was mildly warm and not dry until harvest. Whites harvest went great, acidities were naturally high and we were satisfied with the phenolic ripening. In between the picking of the whites and the reds we have received hail which have affected our Montepulciano harvest for a good 40%, harvest went slow as we had to select the best berries and the yields were decreased from it.

2018: a spring characterized by a regular and beautiful alternation of warm sunlight and pouring rain, this pushed vegetation until summer arrived. Temperatures were particularly high and dry for most part. We did received two days of rain in mid August that made the plants breathe again. We were very satisfied with the whites harvest. In between the whites picking and the reds, lots of rain prevented us to go in the vines and pick, allowing meanwhile the Suzuki fly to settle in some part of the vineyards. The harvest of Montepulciano was subjected to a careful selection, ensuring great quality but a diminished quantity.

2017: very warm and dry vintage, after registering very high summer temperatures, there was no rain from April until harvest. Due to the lack of rain, the yields have dropped of 40%.

2016: cooler vintage, the winter was characterized by the most copious snow of the last 10 years, more than 1.5 mt at the end of January have allowed to fill the natural water reserves and allowed the vines to start the growing season with a solid water access. Spring has been rainy and summer saw more moderate temperatures compared to average.

2015: very balanced season with rains at the right time and sun at the right time. The year saw temperatures in the range during the whole season and a regular and model growing cycle. The Montepulciano from this season is a wine the family decided to age for the 80% of its production.

2013: sun and rain at the same time, very nice quality of grapes came in. It gave us Trebbiano and Montepulciano of great equilibrium.

2012: the rainy vintage has brought great delicacy. It doesn’t have the strength and structure of 2013, but ethereal flavors and nice lengths.

2011: very warm and dry season, for the Montepulciano it has been a season of great power, structure and density. Trebbiano could have taken benefits from a better acidity that lacked due to the droughts of that year.

2007: balanced season with a fairly warm summer. The wines from this year are particularly loyal to the climate of its season. Have inherited the acidity of its spring and the matter of the summer’s hot days.

2005: A vintage of great importance. The Montepulciano from this season is one in between the most faithful and elegant that the winery has ever produced.

2004: A cold season, the Trebbiano has taken benefits from the rain to preserve its acidity and longevity.

2003: very warm and dry season, the Trebbiano struggled but the Montepulciano from the old Pergolas has managed to keep elegant tannins which were protected from the sun by the leave’s shade. Despite the warmth of the vintage its a wine that brings back truthfully its season, keeping the acidity that now reveals itself with purity and vibrancy, showing great unity with the bold tannins which have had the time to fully integrate.

2002: cool vintage, the wines have great acidities that allowed both Montepulciano and Trebbiano to generate elegant and age-worthy wines.

2001: a vintage of great balance. The old time Pepe followers must have already noticed the love that the family nourishes for this iconic vintage, whose backbone and core acidity integrates masterfully the refinement of its tannins.

2000: another important vintage for the Pepe family, warmer than 2001, tannins are rounder. An enveloping Montepulciano.

1998: an high quality vintage at Pepe, the wines started with a richness that today has refined and the time let wines synthesize its voluptuousness.

1997: a warm vintage, across Europe. The Montepulciano is reflecting the warm sensation without loosing its backbone.

1995: very warm vintage with a particularly dry summer. The wines of this vintages stand aside, they do not follow the trend but show different aromatic notes related to the evolved flavor profile of dry berries.

1994: cooler vintage, the wines made during this season have preserved an acidity that originated in the rainy spring they lived. The aromatic profile have preserved with ease and elegance a bouquet of perfumed flowers and red fruits.

1993: marvelous harvest. The wines now reveals a savory aspect related to its minerality and its original matter. Its aromatics are deep and complex with a beautiful aptitude of evolving in the glass.

1985: memorable vintage, summer was very warm and average temperatures were quite high throughout the year. The Montepulciano produced during this harvest is considered from the family one of the best ever produced. An epitome of Montepulciano d’Abruzzo as the family thinks of it and dreams about it.

1984: vintage characterized by lot of rain that makes it a delicate and fragile vintage but with an intense personality that makes it charming thanks to its backbone that enhances verticality and sincerity.

1983: very warm vintage, the deepness in color and concentration of tannins made Emidio think this wine needed time so he aged a very big percentage of this production. Today is a very good example of Montepulciano’s longevity.

1982: a season characterized by rain in both summer and wintertime. The vintage shows delicacy and acidity due to the big amount of rain received during the whole year.

1980: Warm vintage with long fermentations due to high sugar levels in the berries. It’s a wine that struggled to keep up with time but still knows how to reveal some energy in the glass.

1979: one of the most energetic and vibrant vintage of the 70’s, it’s deepness in color and fragrant initial aromas made him age gracefully, it’s youth is still clearly perceived in the glass.

1977: the quality of the season made the wine age with integrity and tension, power and structure. It’s coral evolution today reveals even better and with more precision the initial quality of the wine.

1975: a season like they used to be, the winter of ‘75 has been very cold and its summer very hot. This made a wine with structure and high quality of tannins, their integrity – in balance with the acidity – made the wine age gracefully.

1974: very difficult vintage, cold and rainy. The time has made him tired.

1970: very balanced season, of great profoundness thanks to the good equilibrium during the growing season.

1967: very warm season but no lack of water, that made it face the aging with power.

1964: iconic vintage, everywhere in Italy, balanced in between the summer heat and the rain and cold of its winter. First producing year for Casa Pepe and an important year throughout most of Europe. 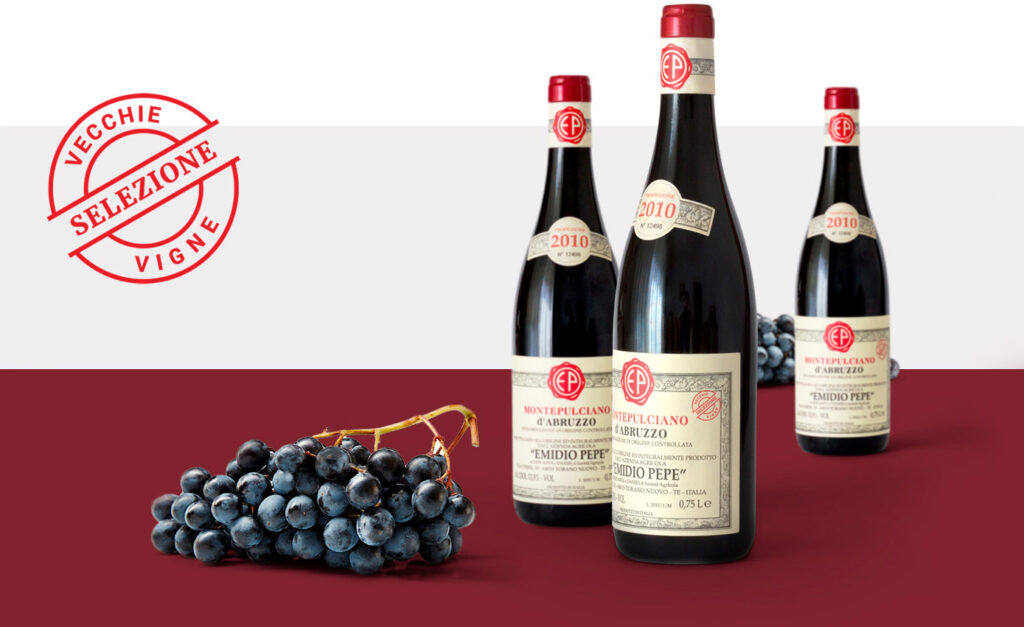 SELEZIONE VECCHIE VIGNE
We make two different bottlings, those grapes coming from our oldest plots would go straight into the aging cellar after the vinification and we wait 4 years until releasing them for the first time and those coming from the younger vines are released into the italian market after two years.
READ MORE

To deeply get into the history of our family and to fully understand our traditional methods and our philosophy, the winery visit is the best way to learn and discover our wines. Starting from the vineyards explanation – where everything begins – production and ageing cellar will follow, where more than 350.000 bottles are stocked and waiting to be released at their best moment. To enjoy the tour we recommend you to arrive 15 minutes before your appointment.